We visited DJ and artist Kenan Juska at his studio at Pioneer Works Center for Art and Innovation in Red Hook, Brooklyn. His exhibition entitled “Daily Operation” opened August 17th. 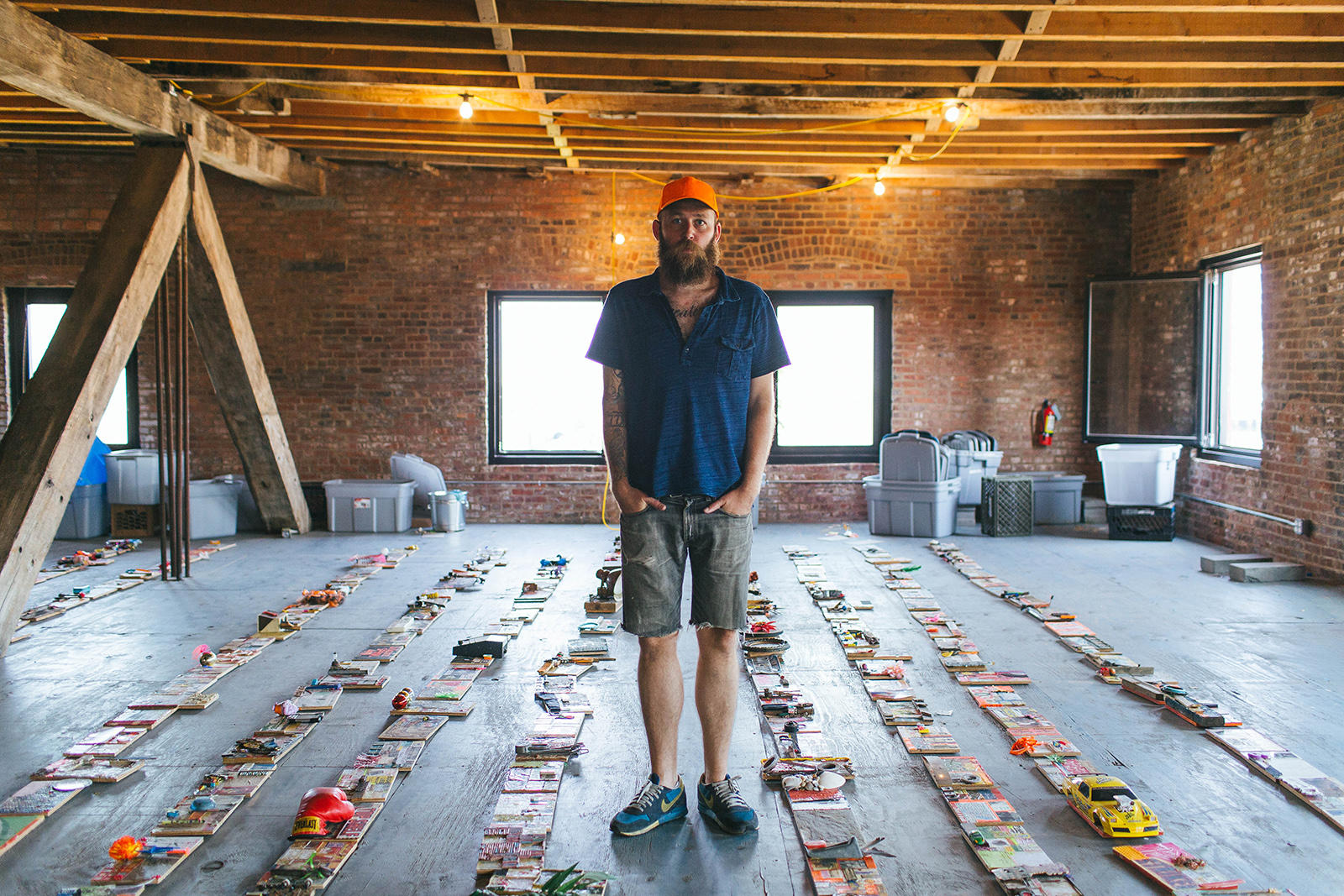 500 pieces, one work of art. Brooklyn-based DJ and artist Kenan Juska is about to open his exhibition at Pioneer Works, a massive collage entitled Daily Operation. A constant explorer of the interaction between art and sound, Juska works best while listening to the playlists he cultivates for his radio show, Chances With Wolves. If you visit Juska in a moment of creation, he’ll be listening to tracks spanning from Marilynn Lovel’s Such A Night to Robert Petway’s Catfish Blues. Undoubtedly, he is a leader amongst those committed to exploring the interaction between sound and creativity.

Experimental, episodic, and inspirational – Chances With Wolves’ mission is to create “the most hauntingly beautiful radio show ever.” Through a commitment to discovery and a disciplined search for innovation, Chances With Wolves earned a reputation early on for their unique sets and choice of songs. “300 episodes in and as far as I can see there’s no bottom to the well of weird, human creativity. It’s infinite.”

Juska launched his career with a six-year run on East Village Radio, crediting his success to dedication, hard work, and notably, collaboration. Working with a partner allowed the duo to push, inspire and learn to trust each other. While mixing minds aided in the creation of their unique, aesthetic show, Juska also mixed artistic mediums to amplify the level of creativity. “There is a collage element in our radio show,” he says, “when at their best they are seamless, the transitions are smooth and overlap, and things that you didn’t expect go great together.” 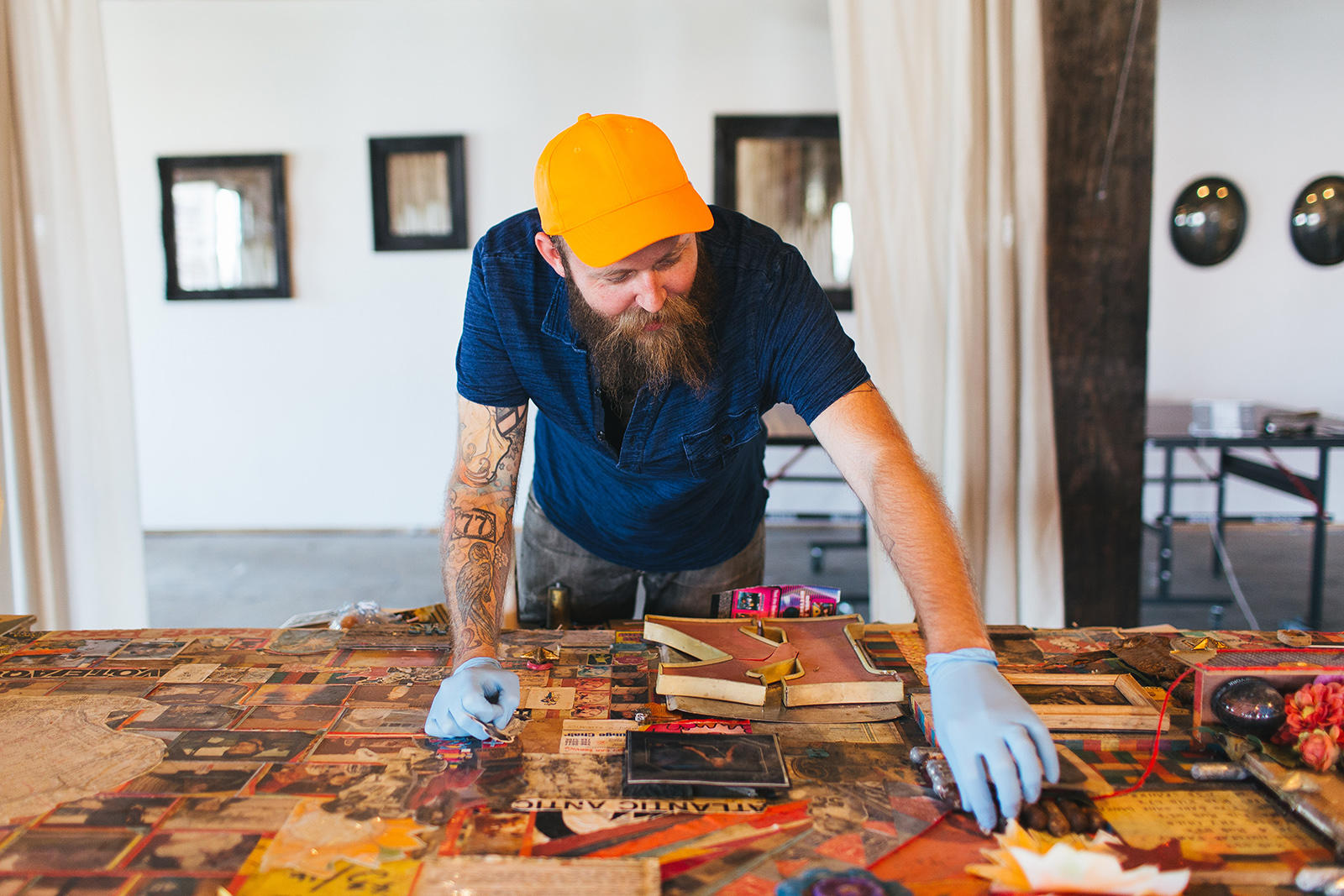 Juska finalizes his monthly collage September 2007 in his studio at Pioneer Works.

Juska’s capacity for creativity continues to grow; he has put together a 500- piece collage made entirely out of found objects, spanning from 2005 to 2007. Standing amongst the individual pieces, it is clear that Juska gained inspiration from everyday objects – what is garbage to some has proven to be of great value to the artist. As we admire the massive collection of objects, he claims, “It was a little crazy. I would walk around with rubber gloves and a bag tied to me, picking up trash.” While he personally collected each piece, he credits the success of the collage to living in a supportive home with his wife, photographer Ro Agents. “She never made me feel crazy, because she knew what I was doing and believed in me.” 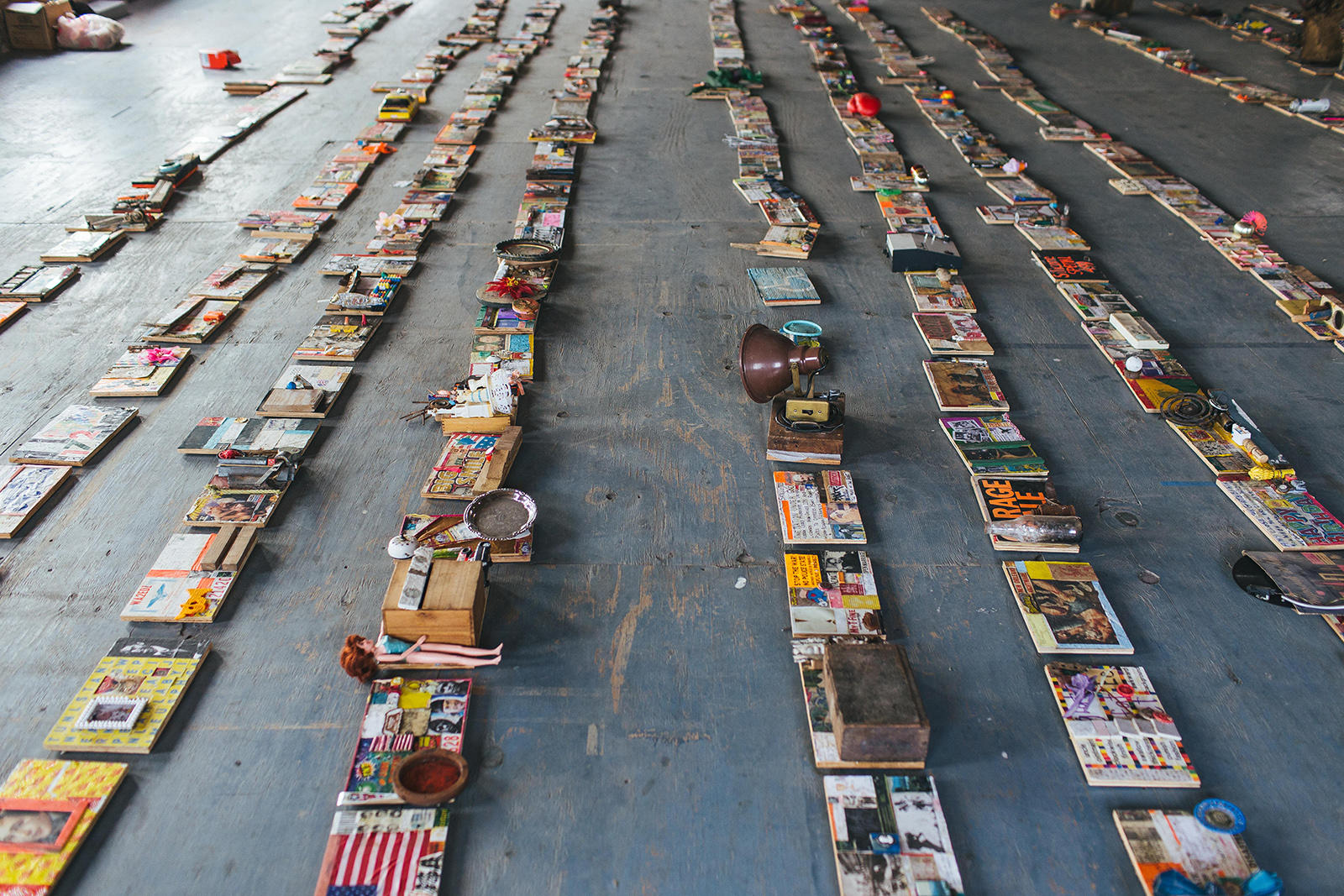 Juska’s daily collages spans from 2005 – 2007, and are made entirely out of found objects.

As artists wander in and out of the space, Juska credits his peers, claiming, “everyone is working on a lot of things here, but everyone has donated time to help me with this, and I couldn’t have done it without their help.” His clear appreciation for artists interacting with and helping other artists reflects the collaborative efforts that helped launch his career, and it is through the interaction between sound and creativity that Juska’s intriguing artwork has been born.